Get me outta here!

To some, the mention of “crab” conjures up images of warm butter sauce and crab claw crackers.  I will admit, that I am fond of a good mouthwatering crab claw, but today I was feeling a little crabby, and not in a hungry, appetite sort of way.   The crabs I am thinking of are too small for human consumption, although I’ve seen a wrasse gobble them up without a second thought.  I have accumulated a good number of crab images in my underwater adventures.  It is remarkable that the crab family is as huge and diverse as it is.  There are hundreds and probably thousands of different crabs and they are all on a photographer’s “hit” list as far as shooting them goes.  One of the features I love the most about crabs is their eyes.  They have very interesting claws too, but their eyes are curious and colorful and seem to portray depth and intensity.  Many people may regard crabs as the spiders of the sea, but unlike spiders, I have no fear of crabs.  To me they are fascinating creatures who deserve to be acknowledged for their contributions to the balance of the marine environment. 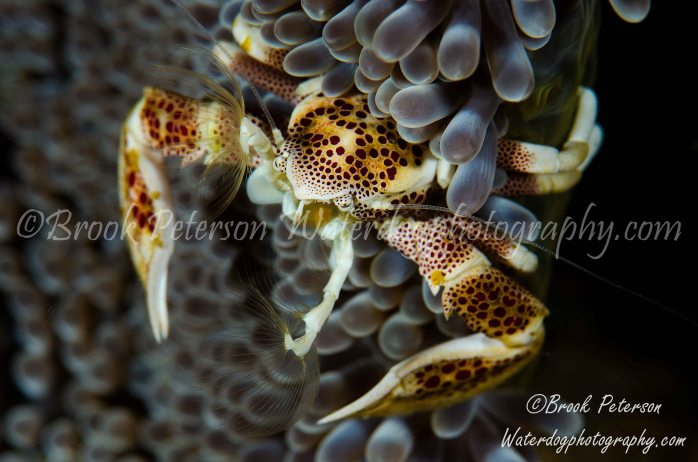 This beautiful Spotted Porcelain Crab lives among the tentacles of anemones.  It has feather-like appendages that it uses to sift the water for plankton and other tiny nutritious micro algae.  The feather-like fans are like little hands that reach out and grab tiny meals out of the water and stuff them in the crabs mouth.  It makes you wonder why he has such big claws? 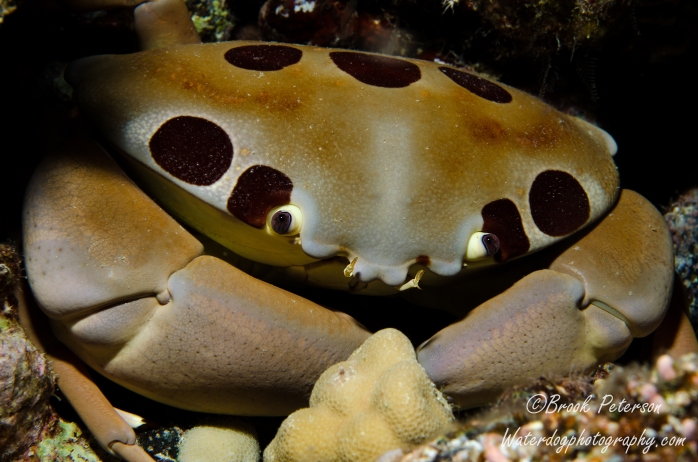 Big claws certainly belong to this Spotted Reef Crab.  Its carapace can get up to around 7 inches wide.  It is also known as a Seven Eleven crab in Hawaii because it has seven spots on the top of its shell, and four along it’s back side.  In Hawaii, there is a story of a hungry god who caught the crab and was pinched by it, drawing blood.  Although the hungry god got his meal, the crabs descendents still bear the god’s bloody fingerprints on it’s shell. 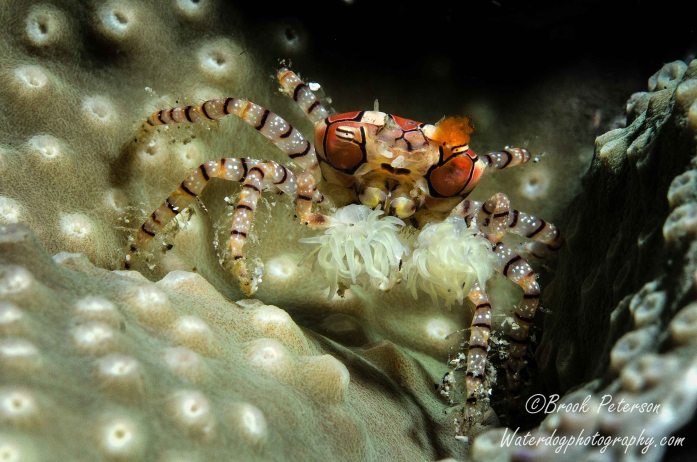 One of my favorites is this boxer crab.  It looks like a bruiser with it’s slitted eye pattern.  This one especially so as it has a tiny anemone growing over it’s eye that just resembles a black eye.  These crabs hold a tiny anemone in each claw that they use for defense.  The anemones get their side of the bargain, too.  They get transported around so that they can more easily grab nutrients from the water with their tentacles. 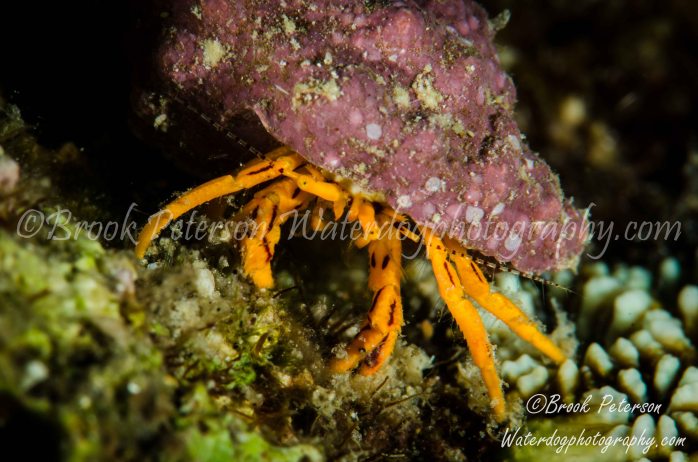 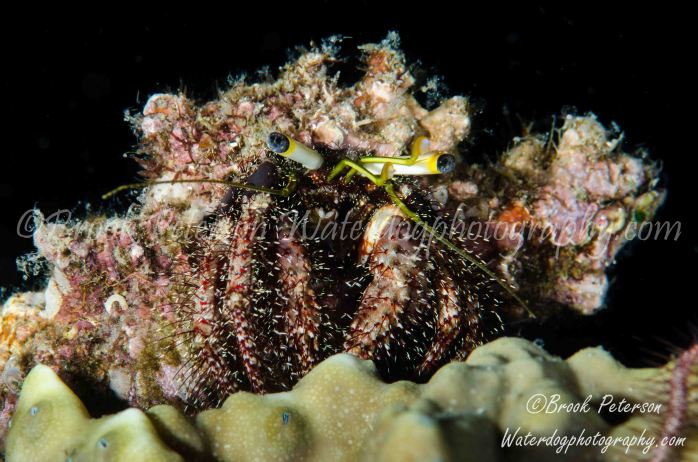 These hermit crabs represent a huge population of crabs that live inside a shell, coral, or any other object (even rocks) they can climb into.  It is their eyes that mesmerize me.  They can be virtually any color, but the blue-eyed ones are my favorite.  Up close, you can see into their depths.  Their iris bears an uncanny resemblance to human eyes, and their pupils follow you around like those creepy statues in the Haunted Mansion in Disneyland. 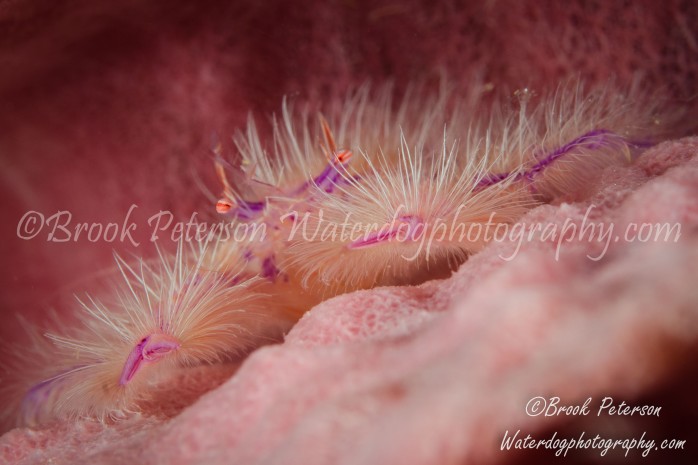 This image is actually a squat lobster, and not a crab, but it deserves mention anyway.  It is covered with tiny hairs and lives on huge barrel sponges.  It is also a bit flamboyant with it’s purple veins, pink body, and orange eyes.

The Orangutan crab is often found on bubble coral and has turned under claws at the end of its feet that resemble an orangutan.  They are sometimes orange or brown, and often red.  Their bodies are covered with tiny hairlike fibers which seem to accumulate debris. 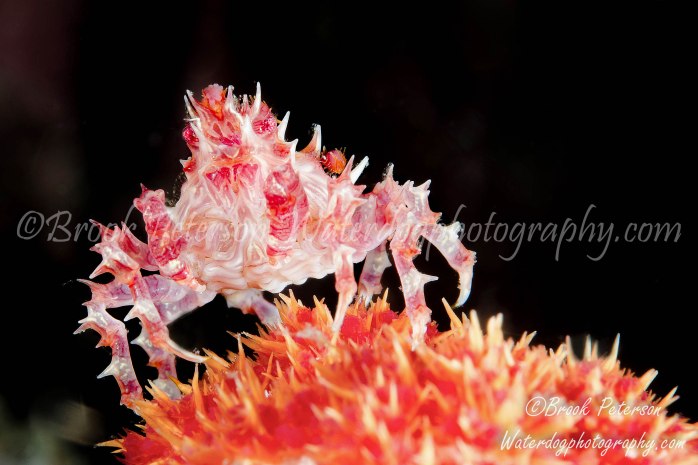 Soft  coral crabs like to hide down in the coral and have to be coaxed up to the top to pose for the camera.  This one has a friend on it’s shoulder.  They have red, multidimensional eyes that seem to see everything at once.  Sometimes they accumulate “weeds” that begin to grow on their bodies making them resemble decorator crabs.

You can see more of my images on my flikr stream or at  waterdogphotography.com,

All images are copyrighted by Brook Peterson and may only be used with written permission.  Please do not copy or print them.  To discuss terms for using these images, please contact me.

A Lemon Shark and Pilot Fish cut through the aquamarine waters in French Polynesia. Sharks are common in these waters and are always a treat to see.⁠⠀ ⁠⠀ Image ©Brook Peterson All Rights Reserved⁠⠀ ⁠

A Lemon Shark and Pilot Fish cut through the aquamarine waters in French Polynesia. Sharks are common in these waters and are always a treat to see.⁠⠀ ⁠⠀ Image ©Brook Peterson All Rights Reserved⁠⠀ ⁠
%d bloggers like this: